Before putting to much thought into the header, let me say: I love YA-Novels, I still do. But I’ve discovered the world of high-fantasy again, the world I’ve fallen in love with when I was 12.
I can’t thank Pat enough. I’ve tasted blood. His books are unique, beautiful and …and… AWESOME. (Yes, I’ll quote some very bad reviews later, but I’ll want to encourage you to read the books yourself) 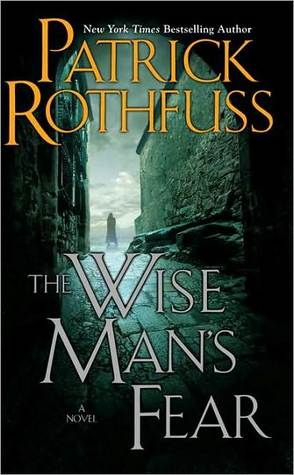 Told in Kvothe’s own voice, this is the tale of the magically gifted young man who grows to be the most notorious wizard his world has ever seen.
The intimate narrative of his childhood in a troupe of traveling players, his years spent as a near-feral orphan in a crime-ridden city, his daringly brazen yet successful bid to enter a legendary school of magic, and his life as a fugitive after the murder of a king form a gripping coming-of-age story unrivaled in recent literature.
A high-action story written with a poet’s hand, The Name of the Wind is a masterpiece that will transport readers into the body and mind of a wizard.

as described on Goodreads

Should I read it?

Okay. Sorry. Overreacting. Everything’s fine.
You may have googled it already or you saw it in the store but you didn’t buy it because you were unsure. Let me take away all the doubts you ever head and tell you: Please, trust me.

I didn’t listen to a friend of mine who told me years ago that this book was a new one, a jewel, drowning in all that “okay-and-nearly-good”-fantasy stuff. I’m glad that I haven’t read it earlier, because the third book is not released (yet). (I guess it’ll be a third and a fourth book. A story this BIG can’t be put down in only one book with 1000 pages.)

THE WRITING: Very illustrating but smooth and suspenseful at the same time.

THE CHARACTERS: Kvothe seems to be one hell of a character because either you love him or you despise him. (that’s just the impression I’ve got on the internet). Nevermind, there are enough other characters that’ll fascinate you as much as he does. His crazy teacher, for example (okay, Master Elodin is not really mad. He’s a genius. That’s what I’m thinking.)

But I’m also really fascinated by the variety of opinions out there. Someone on Goodreads wrote

“His world is about as strange and dangerous as a mashed potato sandwich. His protagonist is comically overblown wish fulfilment for people who weren’t popular in college. I’m absolutely mystified that this novel is so highly regarded by so many.”

(as you can read here)

I don’t know what sandwiches you’re eating but they have to be quite deadly if you’re really talking about “The Name of the Wind”. The Protagonist can be … strange, I’ll admit that but he was interesting. You already have problems finding interesting people in reallife and having a protagonist that is not so relatable but interesting is a big achievement.
It’s really a matter of taste, I guess. (Still, on goodreads it has nearly the TOTAL fifth star. Just sayin’.)

If I had to pick a book to make people fall in love with fantasy books, I would give them this. I would watch them, as they slowly fall for this world, this character, this fabulous writing and this AWESOME Story. These books are just the beginning of the story and outmatched the expectations I’ve ever had. How great and fantastic and frightening and suspenseful and fascinating will therefore the final day be?

… Yeah. We don’t know. But we don’t need to know. Pat takes his time writing the finale of the story and his already been working on it for years. I just HAS to be good.

You hopefully have the urge to go to your next bookshop and buy it.
Thank me later.

Gif from here and here.