I’m sorry for disappearing for nearly a month. I’ve had exams and I couldn’t really get myself to write anything about .. anything, really.
Today, I’ll present you the book I’ve read after my “being-depressed-because-the-third-kingkiller-chronicle-book-isn’t-out-yet” – phase. … Okay, If I’m honest: It’s my latest obsession (K-POP) that drained all the energy from me (in a good way…I think.). But here you go. 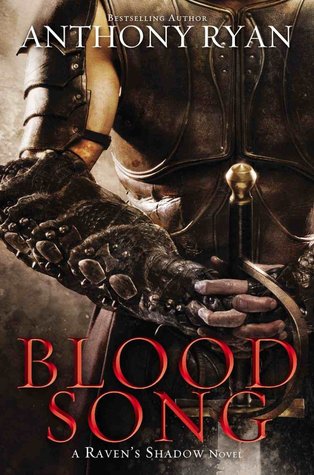 “The Sixth Order wields the sword of justice and smites the enemies of the Faith and the Realm.”

Vaelin Al Sorna was only a child of ten when his father left him at the iron gate of the Sixth Order. The Brothers of the Sixth Order are devoted to battle, and Vaelin will be trained and hardened to the austere, celibate, and dangerous life of a Warrior of the Faith. He has no family now save the Order.

Vaelin’s father was Battle Lord to King Janus, ruler of the unified realm. Vaelin’s rage at being deprived of his birthright and dropped at the doorstep of the Sixth Order like a foundling knows no bounds.He cherishes the memory of his mother, and what he will come to learn of her at the Order will confound him. His father, too, has motives that Vaelin will come to understand. But one truth overpowers all the rest: Vaelin Al Sorna is destined for a future he has yet to comprehend. A future that will alter not only the realm, but the world. ”

Seriously? Another one? Why should I read the exact same story again?

That’s what you’re thinking. Another story of a hero, born out of abandonment and the will to strive to greatness … or at least something that sounds similar like that.

First of all – there is no glory or revenge that’s driving this main protagonist. It’s friendship, loyalty and the will to live. I’ve read this book after finishing “The Wise Man’s Fear” from Rothfuss, so I knew I shouldn’t be too disappointed if it sucked.
Guess what – It didn’t.
I really got into the story so quickly, I forgot the book I thought I would compare it to. It’s written very well, the characters are diverse and really, really interesting and there are always some mysteries which have to be uncovered.
Currently I’m on the third and final book on this series and I’m starting to confuse so many characters (the “Game-of-Thrones”-disease), because at one point you’ll pick your favourites and don’t really care about the others anymore. That’s a danger with creating a world with spotting every [damn] character, but I can live with it. The story makes up for it.
If you’re looking for someone as entertaining and shocking as “The Name of the Wind” but slightly less complex and more … rough, actually, than read this book!
… and yes, this is a gif of Assassins Creed. Deal with it.